Head of department of diseases of nervous system and neurosurgery

The Department of Nervous Diseases was established in Kazakh Medical Institute in 1934. It`s founder and the first director was Professor Evsey Moiseevich Steblov (1934-1956 gg.). He began the work with only one assistant and one analyst. Then, the department expanded and he created a team of experienced teachers. Successor to Prof. E.M.Steblov was Prof. Mukhametzhan Khakimovich Fariz (1957-1976 gg.). From January 1977 to August 2000 the department was headed by Professor Smagul Kayshibaevich Kayshibaev, and then from September 1, 2000 to September 8, 2004 by Professor Bolat Amenovich Abeuov. Recently, the Head of department is Professor Erkyn Smagulovich Nurguzhaev.

Nowadays there are 20 people in staff (the head of department, two professors, six associate professors, 12 assistants), including 2 professors, 4 doctors (full MD) and 13 candidates of sciences (PhD).

Students from medical, pediatric, dental and health-care faculties study there. Through the residency and postgraduate programs on the basis of this Department were trained thousands of experienced clinicians, neurologists, 12 doctors and 50 candidates (5 of them headed the department of neurology at medical universities in Almaty, Astana, Karaganda, Shymkent and Aktobe).

There worked worldwide known scientists and neurologists: Associate Professor R.G. Mandryka (she had been heading the Department of nervous diseases in Karaganda Medical Institute for 24 years (1951-1975)), Associate Professor Z.M. Bryantseva (she had been leading the Department of Nervous Diseases State Institute of improvement of doctors in Alma-Ata for 5 years (1975-1980)), I. Giants (Doctor of Medical Sciences, Senior Research Fellow, Institute of Balneology and Physiotherapy in Pyatigorsk), B.A. Atchabarov (National Academy of Sciences of RK, also he had been working as Dean of the Kazakh Scientific Research Institute of regional pathology for 30 years).

Total number of scientific publications, made by employee is more than 500. 14 collections of 12 books, more than 100 guidelines, 5 manuals, 2 textbooks for students in Russian and Kazakh, Russian-Kazakh dictionary of neurological terms were published, more than 20 authors’ certificates for inventions and innovations for more than 30 were received. 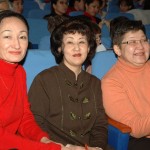 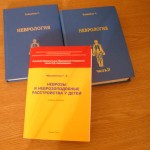